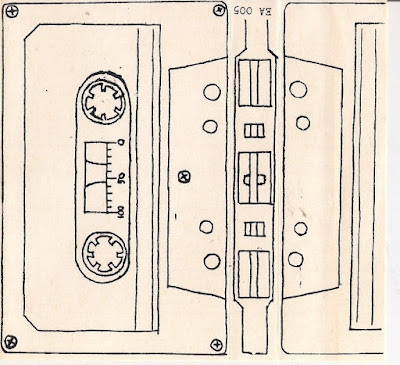 Excellent tape-work by this unknown project somehow related to Enema Digest, A group of three hardcore industrial musicians from London, named after Paul Daniels, who was a famous magician & TV personality in the UK. The band set up a gig and announced it as Paul Daniels World Tour. Paul Daniels is the same musicians as Brobat Enema and Enema Digest.

The music evolves in areas such as "primitive" minimal synth, repetitive electronic jingles and Rhythmbox music.
EXART (label, studio and archive) was founded by Hessel Veldman and Nick Nicole (2) in October 1982. In 1978 Hessel had started composing experimental music and before 1978 he was playing the guitar in several local blues- and rock bands. The label wanted to spread new experimental and improvised music. The studio was the place to improvise, compose, record and make radio-programmes, mixes and remixes. At the same time, Veldman started to preserve sounds in the Exart archive. The label ended its activities in 1995, although there are rumours that Veldman has plans to do digitalized reissues of some of the releases.
Variations on the label name (Exart Cassettes, Exart K7) are used on some of the releases. (from dijima blog)click me

Side A: Live at St Chad's, Durham, U.K.
On this release, the label is called Exart Cassettes.