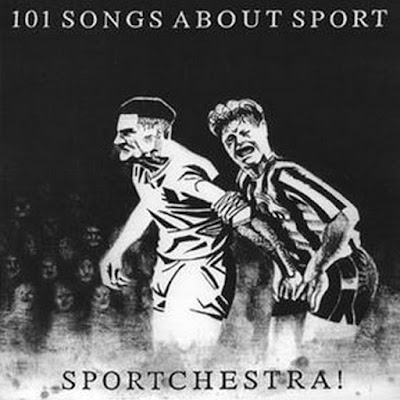 Amazing double vinyl containing in fact 101 songs about the sport, it came out with a gatefold cover. 8 page Lp-sized booklet with lyrics.
For the most curious Sportchestra is a fake name used by the famous Chumbawamba,a British band that formed in 1982 and ended in 2012. The band constantly shifted in musical style, drawing on genres such as punk rock, pop, folk, and experimental. Their anarchist or libertarian socialist political stance exhibited an irreverent attitude toward authority, and the band has been forthright in their stances on issues including animal rights, pacifism (early in their career) and later regarding class struggle, feminism, gay liberation, pop culture, and anti-fascism. 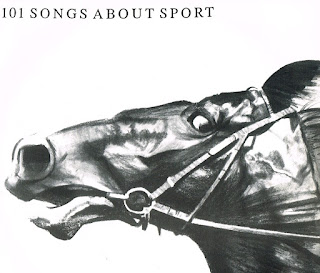 Agit-Prop Records was an independent record label founded in 1985 by the members of the punk band Chumbawamba.
Before starting the label, Chumbawamba had distributed their records and tapes using the Sky and Trees label. As well as releasing their own recordings, Agit-Prop also put out a number of records by other groups.
Agit-Prop was run in co-op form adhering to anarchist philosophy. (from Wikipedia)
This is pretty rare, great album, excellent lyrics.
Enjoy it.
~f)a_r~a(w*ay)
click me