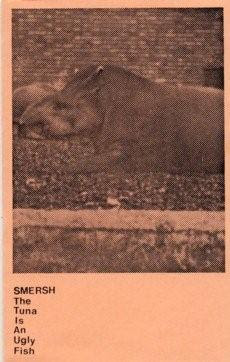 Beat studio guru Mike Mangino (Pink Noise, Pop-Tarts) and Chris Shepard (Pop-Tarts) formed Smersh as an experimental big-beat techno/industrial project and began releasing cassettes in 1981. Smersh recorded improvised cuts every Monday night, released countless cassettes on their own label, Atlas King, and were featured on more compilations than you can track down. They never played live, never played the same track more than once.(from Discogs)
Here a very interesting interview with Mike Mangino conducted by Dmitry Vasilyev in August 2000.
Atlas King was the tape label of Smersh, founded by Chris Shepard and Mike Mangino in 1981.
In 1994 the last tape was released.
The follow-up label is Mirandette Popular.
This is their official webpage where you will find lots of info, discography, and artworks.
Enjoy it.
{fa~r}a)w~a(y~
click me