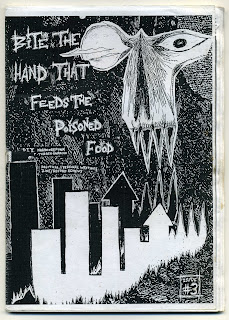 This is an amazing joint effort by two great fanzines active in the early 2000s.Lots of personal writings, ideas/critiques about the punk scene some interviews and music+zine reviews.I have found it very interesting.
Few words from other webpages:
Split zine, 68 pages A5, with an A3 split poster. Written mostly on the theme of sexual assault, rape and gender in the punk scene, with lots of pieces on the various issues involved. Interview with INEPSY (Canada), and with 4 women (from Ireland/Brazil/Canada/Australia) on their experiences of sexism within the punk scene in Ireland and also where they´re from. Pieces also on Halloween (Samhain) in Ireland, it´s pagan roots, and the chaos it brings to the streets, and another on the tyranny of living in cities. Lots of zine & record reviews, drawings, photos and various other small pieces.(from Eirecore) 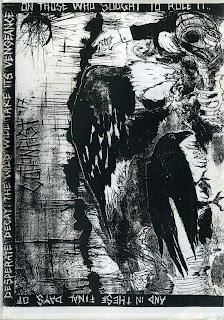 Cotton Fist was written by Eric. He started the zine in 1997 after coming across various zines and freesheets and feeling they weren’t dealing with subjects that he was interested in, such as animal liberation, animal rights, and anti-fascism, which would make up the content of early issues, along with record and cider reviews. Getting more aware of other zines and avenues of writing, Eric tried to put more of a personal perspective on political issues. The last issue of Cotton Fist , which was the 17th issue, was a split zine with another Dublin punk zine Bite the hand that feeds the poisoned food and was released in 2005.
Over the years of doing Cotton Fist Eric expanded its distribution from purely local by sending it for trade/ review to other zines and to various shops, distros and individuals in Australia, North America and all over Europe.
Bite the hand that feeds the poisoned food is an anarcho-punk zine from Dublin, Ireland.
Bite the hand that feeds the poisoned food is put together by Cormy. It contains articles, interviews, music and zine reviews. It has had interviews with Bastard Youth, Niall McGuirk (who used to write React zine), Tom Inglis and Conor (who used to write King of the Sad People). The articles often are of a personal/political nature. The last issue was a split zine with another Irish punk zine, Cotton Fist.(from Zinewiki)
Enjoy it.
f(a~r~a:w~a:y~
click me 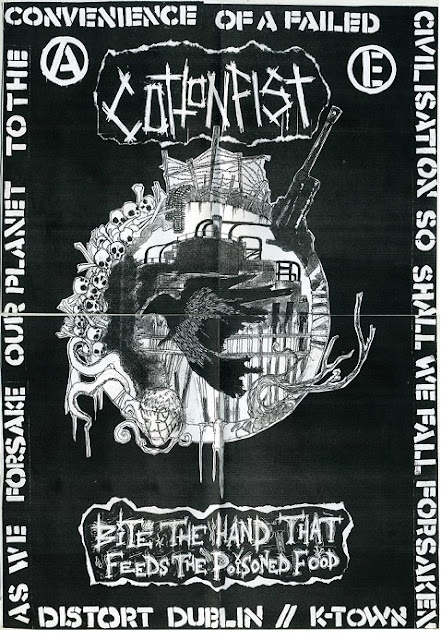