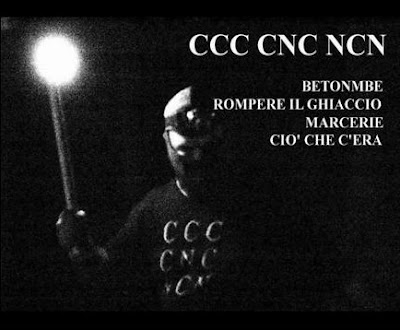 In this digital release, this legendary collective presents 4 soundtracks of 4 different performances held in Torino and around that city, their hometown, in the years 2005 and 2006.The last track is instead an unreleased track recorded in a studio.

I have already written about them when I posted their masterpiece album released in 1989 "Suidicio Modo D`Uso".
For who missed that post  CCC CNC NCN is a radical collective from the anarchic/antagonist underground scene, combining old-school industrial sound with conceptual records and live shows about unpopular topics, such as suicide as an extreme choice of freedom, mass control, and oppression.
An FB page about them and their recent activities is here, on this page you can read also few reviews about those performances.Unfortunately, this page is in Italian language, only.
Enjoy it.
~f*a^r~a)w^a~y(
click me
Posted by faraway at 15:35