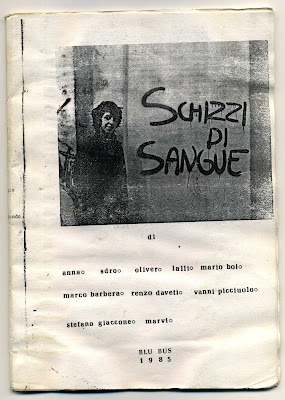 This production(tape+zine) seems to be the very first release by Blu Bus an indipendet record label started by Franti and then managed by kina. Strange enough in the Blu Bus official webpage this production is not listed.
It was a project coordinated by Marco Barbera (who later formed Barboncini Punx),a fanzine with poetries and a music cassette with the same poetries read by the artists and with added musical/sonic comments by Stefano Giaccone and Vanni Picciuolo of Franti.

Inside the zine you`ll find poetries by Sdro(Kollettivo) Oliver(CCC CNC NCN),Benzo(Fall Out) Stefano Giaccone, Lalli, and Vanni Picciuolo of Franti + few friends who were part of the anarchist Collective of Torino before El Paso was squatted in 1987.
It was recorded in Radio Popolare of Torino and released in a limited edition of 100 copies in december 1985.
To complete this post I am adding here a cool video with  one of these tracks,I must give my great thanx to Babs + Jukbass for the english translations of this poetry and to Alez for the great work of video editing.
The last and bigger "thanx" goes to Marco Barbera for giving me all the useful info about this release.The poetries are in italian language only.
Enjoy it.
~f~a^r:A¬w:a~Y~
click me