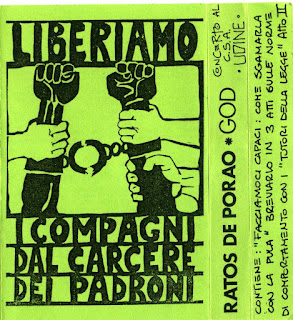 Live split tape with 2 good bands both gigs recorded at the social squatted center of Udine(Northern Italy) in 1989.Both recordings are very good but there is very little info about the bands.

God was band from The Netherlands,at the time of this gig they had  already released 2 lps,they play a nice form of pysch rock mixed with some grunge influences,post rock with powerful guitar riffs.
Ratos De Porao  was an hardcore/punk band from São Paulo, Brazil, formed in 1981.They are definetely very well known now. Ratos de Porão means "Basement Rats" in Portuguese.
A nice split tape created by the squatters of this social center with the original recordings of those great gigs.
Enjoy it.
*f^a¬r~a:w/a>y~
click me
Posted by faraway at 14:20