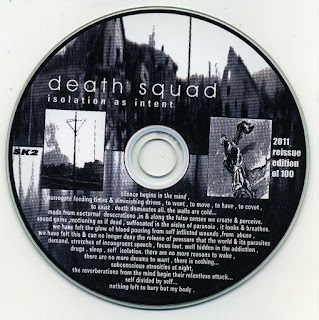 Death Squad ended in 2000 then evolved into the current project MK9.It is a project of video+body performance while using strong powerelectronics messages.This cd was released on the american Spastik Komminukations in 2000 and then re-released on the same label+its sublabel  Neural Operations in 2011 as limited edition of 100 cd-r copies.

I spoke already about this non-compromising artist when I posted the amazing video compilation:La Bas at 121 and the compilation cd Prosthetics.
MK9 is still active and you can check his nice webpage here and also his online catalogue Neural Operations where this cd  appears to be sold out.
For all the lovers of noise industrial,this is a shining pearl.
Enjoy it.
~f*a^r~a^w*a*y~
click me
Posted by faraway at 12:13