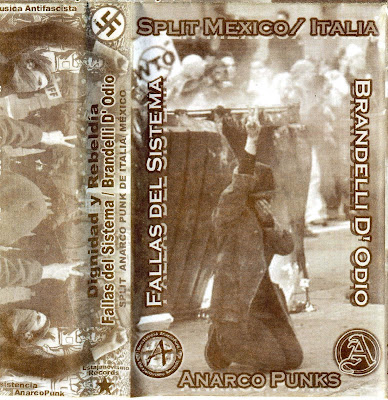 La falls Del Sistema is an anarcopunk band from Guadalajara(Jalisco state,Mexico)!They are active since the end of the 90s,you can check their activities using their FB page.

Brandelli D`Odio was a collective of squatters coming from different towns  and based in the squats in Foggia (Southern Italy),they were active  from 1993  until 1997, acting as a kind of open collective.Their line up changed various time according to how they were planning their shows and the different possibilities of the time-travel circumstances. They used to mix into their live shows music and experimental theatre.
I wrote about them many times and you can find lots of stuff by this band in this blog.
This split tape edited by Estajanovismo Recs ,which is the label managed by La Fallas Del Sistema, has a folded cover sleeve reporting lyrics and pics,you will find here the lyrics by Brandelli D`Odio translated into spanish.Both bands offer us good recordings too.
Enjoy it.
~f)a~r)a~w)a~y*
click me
Posted by faraway at 14:16