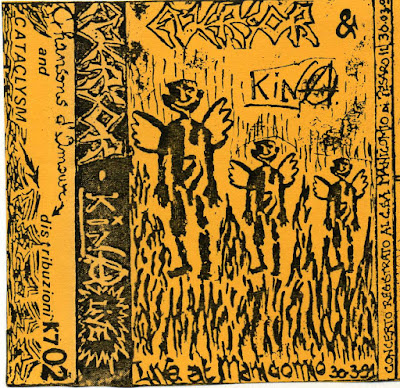 Eversor started in 1986 in Pesaro, Italy as a deaththrash metal band, later thrash crossover and finally in the early 90's emocore / melodic hardcore; From February 2000 the brothers Marco and Lele Morosini continued as The Miles Apart.
Kina was a very famous  italian Hardcore Punx band from Aosta formed in December 1982 by Sergio (drums), Alberto (guitar) and Giampiero (bass), and active till 1997. In 1998 Sergio and Alberto formed Frontiera.They also were running the very active Blu Bus independent Hardcore Punk label founded in the Spring 1984.

Chanson D`amour and Cataclysm was a small label founded by the members of Eversor to distribute their productions.
This tape was recorded live in a social squatted center in Pesaro.
The recording is ok and the cover sleeve reports few info.
Enjoy it.
~f(a~r)a~(w:a~y)
click me
Posted by faraway at 14:00