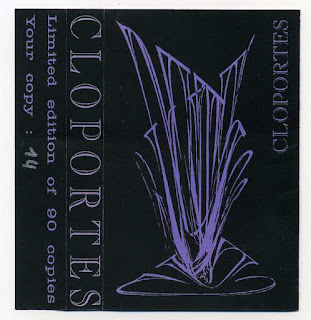 Cloportes is a compilation of tracks featuring mainly Cedrik Fermont.
Črno klank was born in the middle of 1989. The project started as a duo playing noise, industrial and experimental ; the two members were Vinofv -052 and C-drík [Kirdec, Axiome, Ambre, etc.]. In 1992 the band splitted [because of musical and above all political point of views] and C-drík decided to go on alone. But the project soon stayed more or less in standby until he decided to restart it as a collective in which several people from Belgium and France could play [XD, a throat singer, Greg Durez and Benjamin, who are musicians - above all drummers - in several traditional bands such as Les esprits frappeurs and JeannElisabeth Shrapnel and Aliena Vena as a singer. But once again the project didn't last. C-drík is now mostly working alone for this project composing tracks including influences from traditional music, electro-acoustic, ambient, industrial, noise or power electronics.
But the project is still open to any kind of collaboration and C-drík worked together with Gisèle Pape on a short movie presented at the experimental short film festival Fenêtre sur court in Paris and won a prize for the best soundtrack.

M.E. 3 Started in 1990, M.E.3 was the first solo project by C-drík Fermont.
Globulex is a Casio-synthesizer based project that existed from 1992 to 1993, featuring Agnès Gilson & C-drík Fermont.
All those info taken from Discogs.
Cedrik is still very active with lots of projects and his own label Syrphe,you can check  all his activites on his well done webpage.
Enjoy it.
¬f~a¬r~a:w:a¬y~
click me
Posted by faraway at 13:35