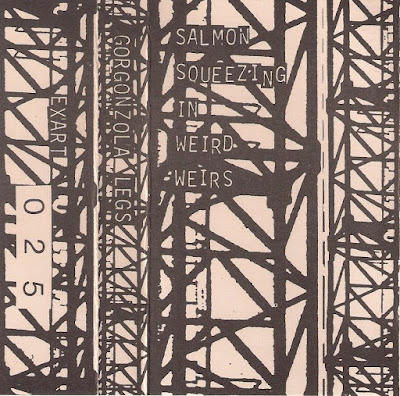 1984 was the year in which Gert Jan Prins (www.gjp.info/) visited Hessel and Nicole at their apartment on the 11th floor, overlooking a big industrial landscape. Recording-sessions were started at Gert Jan’s “Fish Warehouse” studio. Gert Jan Prins, Hessel Veldman, Herman te Loo and Jos van Duyne became GORGONZOLA LEGS. Hundreds and hundreds of hours of “live”-recording sessions took place. At some of these sessions, other musicians were present, such as Jos van Ommen, Ruud Junge, Martijn Swart and Masaki Oishi. At the end of 1984 “GORGONZOLA LEGS” was released. On this one hour cassette, the first mixed recordings could be heard. The group also wanted to do concerts and so GORGONZOLA LEGS more and more became a “live”-band.


In 1986 a second tape was released, entitled “SALMON SQUEEZING IN WEIRD WEIRS’, a new compilation of “Fish Warehouse”-recordings. “BUNKER” was recorded live at the Bunker in Rotterdam, October ’86. The complete concert could be heard on another EXART-issue. In 1987 the powerful voice of the Japanese singer Masaki Oishi gave a new dimension to the sound of GORGONZOLA LEGS. Hours and hours of recordings were made. At the end of the year, 6 hours of mixed material had to be remixed to L.P.-format. In April 1988 EXART decided to make it Holland’s first independent C.D.-release: “PISCATORIAL DEBRIS’. At the same time, with the great help of Henry van Kleeff, the “PISCATORIAL DEBRIS” video was made. A beautiful 20 minutes sound sculpture video was realized. The video and C.D. got a lot of international attention and was performed on several big music/video festivals. During the late 80s, GORGONZOLA LEGS-material was also released on labels in Portugal, Italy and the U.S.A.(from djima.blogspot.com)
PRIVATE DISCOGRAPHY: 1978 – 2000
“Unreleased Material: ITAL”
CDR 74min
GORGONZOLA LEGS
“Unreleased Material: SHORT STORIES”
CDR 74min
GORGONZOLA LEGS
"The Concert Sessions: STEDELIJK MUSEUM”
CDR 74min
GORGONZOLA LEG

EXART (label, studio and archive) was founded by Hessel Veldman and Nick Nicole (2) in October 1982. In 1978 Hessel had started composing experimental music and before 1978 he was playing the guitar in several local blues- and rock bands. The label wanted to spread new experimental and improvised music. The studio was the place to improvise, compose, record and make radio-programmes, mixes and remixes. At the same time, Veldman started to preserve sounds in the Exart archive. The label ended its activities in 1995, although there are rumours that Veldman has plans to do digitalized reissues of some of the releases.
Variations on the label name (Exart Cassettes, Exart K7) are used on some of the releases.
(from dijima blog)click me
Posted by faraway at 02:53