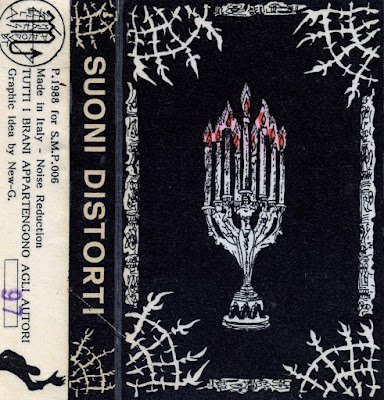 Astonishing sampler released by the Italian label Stella Mars Product active on the end of the 80s.It came out with a booklet that is not included here.

A good review of this tape was published on Soft Watch and then re-published on a Discogs page.
Enjoy it.
~f(a)r(a)w(a)y~
click me
"The first two tracks are by NOSTALGIE ETERNELLE - "Absorbed In Thought" is a fast little number with a strong dramatic atmosphere to it, sounding not totally unlike THE CURE in a more Electronic frame of mind. "Without You" has a peculiar construction - bleeping synth and what sounds like backward drums form a stiff construction for the vocalists distorted voice to drool across. NEW-DA offer the next two - "Politiko" entering on a huge sweep of synth before the guitar snarls and swirls not unlike a bagpipe sound. It soon picks up to be a running-speed heavy thing owing as much to Punk as to the Experimental scene. The vocals have a savage sped-up sound to them, a little like the sound a caged Wildcat might make. Its good stuff that would get people moving on the dance floor. "E Così Sia" follows - same tempo but a little less dense with harmonic vocals from ANGELICA over the top, fast yet warm music to keep you up and moving. DIX TIAU PIA offer the last two on side one - "Laughing Aspid" opens to radio voices before crashing through dimensions with an awe-inspiring construction - you feel they're using a fairly limited selection of instruments, but they push them to extremes, achieving some brilliant effects which really have to be heard. "Shadows" is a little more upbeat and full of interesting sounds - it reminds me a little of "Day Breaks, Night Heals" by LEAR/RENTAL, although this is a lot more commercial.
Side two opens with the first of two from L.A.S.'s CRIME "The Marble Of Punishment" which is a complex rhythm of samples, some of them vocal, others percussive. It then transforms into something with a much fuller sound - big keyboard sounds which sparkle and glisten like Acid Rain. Their sound makes me think they perhaps traced modern Experimental / Electronic / Industrial music back to THE NORMAL's single, then went off at a tangent from there. "Hypochromatik" is another similar track full of thunderous white noise drum sounds punctuating the entire pattern. Good stuff which would sound even better as a whole album, Then comes TITO TURBINA TAST. FUT. with "La Legge È Legge", a catchy, moving rhythmic thing sounding like a Steel Band letting off steam. "Prima Danza" follows that, a little more dignified pace, but they still manage to retain the huge size of the music. Their music is repetitive but then this is half of the attraction. The last two tracks come from RADICAL CHANGE - "A-Normal" opens to a sort of sustained machine sound, fading to nothing after 44 seconds. "Il Seme" is an Industrial synthesizer thing which sounds full of interesting tones, despite its being a minimalist thing. You think its finally faded away, then it bursts back into life again. Following this is a slice of spoken word, echoed into crazed patterns, then stolen away before you can really focus.

An interesting little compilation introducing groups it'll be worth your while getting to know. It has one or two weak moments, but overall is as strong as iron.