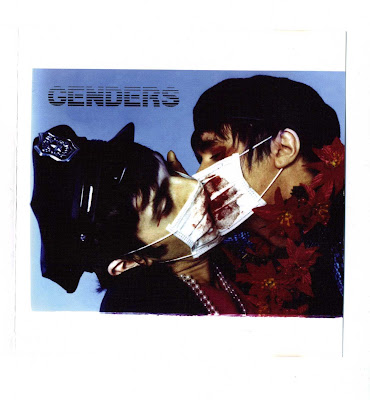 Genders is a duo composed by Evan and Jeans playing an interesting mix of art rock, no wave, minimal sequences + experimental electronic music with a very lo-fi key.
This miniCD was conceived and produced with a very DIY approach.
"Recorded in June 2005 with Evan`s 8 track by us with help by Evan`s Father Curt Johnson..."
Tigerbeat6 is a San Francisco and Berlin- based independent and (mostly) electronic record label run by Kid606 (Miguel De Pedro).[1] The label is run as a DIY operation and releases a variety of electronic music styles, including noisecore, intelligent dance music, bedroom pop, folktronica, and electronica-driven hip hop.[2] The name reflects De Pedro's obsession with cats, which also comes to light in the catalog numbers, all of which start with MEOW. It is also a loose reference to the top-selling teen magazine Tiger Beat. The label's first release was in 2000; it has over two hundred releases in total.[3] A 2001 compilation of the label's output was described as "stripping intelligent dance music of its intelligence[,] often resorting to outright silliness, and sometimes parody."[4] The AV Club described the same compilation as satirizing glitch through "gestures borrowed from punk, indie-rock, and hip-hop."[5]
Tigerbeat6 has four sub-labels: Nibbana, Shockout, Tigerbass & Violent Turd.(from wikipedia)
I really like this, I think is pretty good...
Enjoy it.
~f(a*r~a{w*a~y^
click me