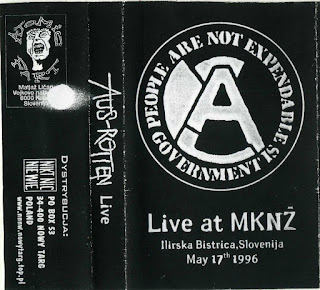 Great cassette documenting a powerful gig by the mighty Aus Rotten...the live recording is just perfect.
Few info from a Wikipedia page about them.
" Aus-Rotten was an American crust punk band active from 1991 to 2001 formed in Pittsburgh, Pennsylvania. Part of the DIY underground, its members practiced and promoted a philosophy of anarchist politics. The band included lead vocalist Dave Trenga, vocalist/guitarist Eric Good, bassist Corey Lyons, and drummer Matt Garabedian. Spitboy singer Adrienne Droogas would often join the band in their later material. The band's name comes from the German word ausrotten, which translates to "extermination" or "eradication".

Enjoy this gig,very well captured with an excellent recording.
Crust As Fuck.
~f*a~r_a)w~a:y~
click me