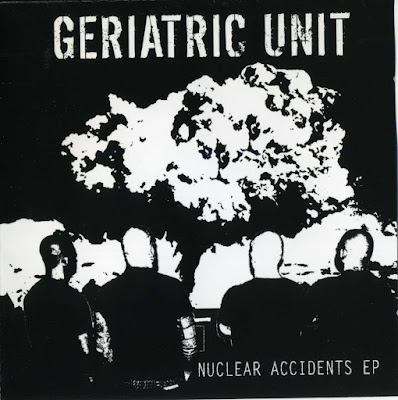 Hardcore Punk from Nottingham, UK, with ex-members of Heresy, Hard to Swallow and Shank.They play a very powerful and fast HC Punk, great recording, lyrics reported in the cover sleeve, here an introduction is taken from their myspace.

"A hardcore punk outfit -- of the "Loud Fast Rules!" school -- made up of drummer Steve Charlsworth, bassist Kalv Piper, guitarist Jim Rushby, and vocalist Gords Holmes (former members of such groups as Heresy, Iron Monkey, and Hard to Swallow), Geriatric Unit first came to some prominence in the British scene with the critically well-received EP release Nuclear Accidents in March of 2007.
A second EP, Life Half Over, followed soon after. The Nottingham, England-based group was then able to release a CD compilation of its first two EPs for Japanese label Speedstate. As 2008 dawned, Geriatric Unit were hard at work on a handful of 7" releases. ~ Chris True"
Enjoy it.
~f(a*r~a~w}a)y~
click me

Track 11 is not listed on the back cover, but seems like an outro to "I Can't Sleep".