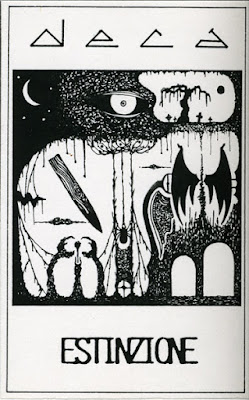 Deca is the project of Italian sound artist Federico De Caroli- active since at least 1986 he has been creating a rather large opus of releases in the realms of experimental electronic music... to quote elsewhere: "Deca is the musical "alchemist" (as he is known in Italy) Federico De Caroli. He has gradually moved from the spacey and melodic style reminiscent of Jarre and Tangerine Dream that dominated his early works to a more experimental sound, involving elements of industrial, noise, "musique concrete" and even Dark Ambient."

His official webpage is here, where you can read the bio, discography, concerts,concepts, side projects and much more.
This tape was released in a limited edition of  77 copies in 1989, and it is a kind of soundtrack for the book with the same name written by Federico himself 2 years earlier.
Minus Habens Records is the legendary Italian industrial and dark ambient label founded by Ivan Iusco in 1987 and still alive and kicking, its webpage is here.
Enjoy it.
~f(a*r)a~w*a~y*
click me
Posted by faraway at 17:33