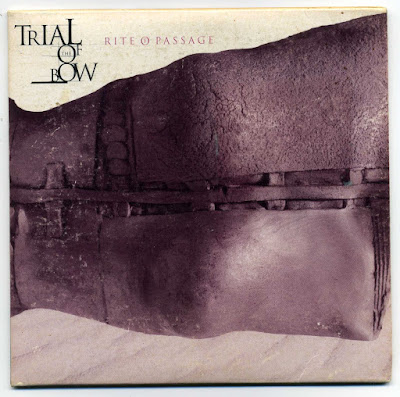 Formed in late 1993 by Renato Gallina (percussion/vocals) and Matthew Skarajew (stringed instruments), Trial Of The Bow emerged from the city of Melbourne, Australia's heart and melting pot of all musical forms. While both members live and work in a metropolis, they strive to remove themselves and their listeners from this and transport them all to places exotic with their bared-down Eastern-inspired music.(from Discogs)

Trial Of The Bow is an Ambient/Neo-Folk/World Music project of two members of Australian Doom/Death act Disembowelment. This has a rare depth and integrity seldom found in most "side-projects", which suggests that this is no mere flirtation with sounds. Influences from various traditions around the world, including Arabic and Celtic, are melded into a whole that strongly recalls Dead Can Dance. Sensual tribal music from Australia, utilizing such instruments as the tamboura, manjira, and e-bow, which not only incorporates the mystical sounds which graced the band's debut, but also offers a further variety of vast musical styles.(from youtube)
click me
Posted by faraway at 13:16