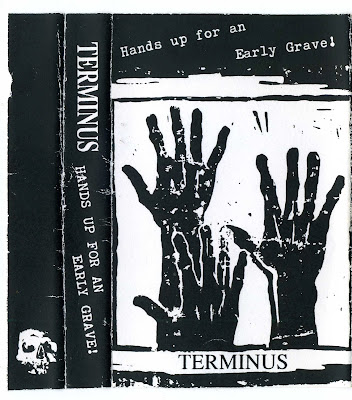 Terminus was an English band active from mid 80s to mid 90s .They released few 7inches and 2 lps on Words of Warnings Records and TPPL Recs.
On 2003 a retro compilation came out as cd with the best of their songs.
This tape is totally diy, recorded live  in  their practise room with a 4 tracks recorder.
Their music is a clever form of classic melodic HC punk with political lyrics,this tape is instead acoustic and somehow reminds me some of classic english folk and some apocalyptic folk from the northern countries.
Yet it`s not listed on discogs and I never seen it on the net.
I reckon there are not so many copies of it around and it`s for me a little pearl of the underground from the 90s.
Enjoy it.