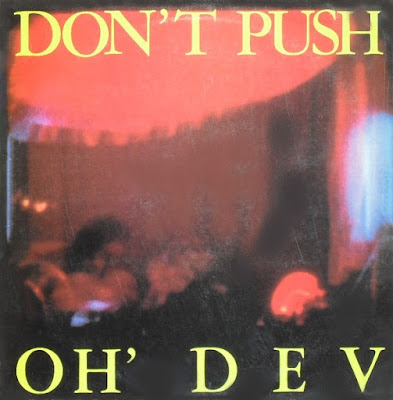 According to band members, the name comes from a populist 50ties Hollywood movie. The female ‘sexbomb’ drops the line “oh’ dev”.
Oh’Dev basic line up was Ruud – drums, Andre (Meer Staal) – guitar and Dirk – Bas. It could be that Dirk was not always in the band, but he played on the Limbabwe recordings. The vocalist could change. In the downloads below two different vocalists are mentioned: Harry (also guitar) and Hans.
The music is a kind of ‘noise-rock’ strongly influenced by Sonic Youth, Scratch Acid and such. Mostly I like bands in the style a-la Oh’Dev, but somehow I never seem to be able to listen through a full release of them. After two songs it starts to bore me and I lose interest. Andre’s guitar playing is based on no skills (he cannot play for real). Although creative in Meer Staal with percussion and vocals, on the guitar he seems to be limited and the noise becomes an assembled repeating structure that loses attention after 5 minutes. A funny anecdote to this is that Andre called himself after the guitar he played: ‘King Zolo’. A cheap piece of crap dumped by Sonic Youth.
Both vocalists didn’t manage to capture the listeners either.
Oh’Dev tried to ‘make’ it. They took every gig offered. Manage to do a few shows abroad and released more records on other, lesser underground than Limbabwe, indie labels. Despite what members try to make us believe nowadays, they never achieved a status in fame and creativity like some other Limbabwe bands (Meer Staal, Pandemonium,….). None of their releases sold for real. The band float(s) well on smooth bizznix talk from the drummer.

This introduction was taken from Limbabwe Official Webpage
where you`ll find 2 other productions as a free download by this great band released on Limbabwe Records.
"Don`t Push" was instead released on the Dutch label Eksakt.
Defunct label from Tilburg, The Netherlands that ceased to exist in 1990.
Enjoy it.
:f~a:r~a:w~a:y~
click me
Posted by faraway at 17:30