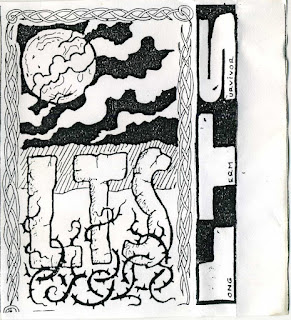 "LTS, or Long Term Survivors, was a French band that played Celtic punk.
Ticho (lyrics, vocals, arrangements and guitar) and Pascal (lyrics, vocals and guitar) ,founded a punk band, Zarbiband. Later, they were joined by Zoé (flute, vocals and lyrics) and Martin (mandolin) and LTS was born, a band that blended traditional music and punk.
The label Pékor Produc released two cassettes "Celtic Core" and "Pu Wong" and a CD that was produced by Nabate "Intime Océan".
In 2003 they toured Slovenia, Switzerland and Slovenia once again. In the Fall of 2003 Martin left the band and they toured Belgium.
Almost all their recordings are available under licence Creative Commons by.nc.sa 2.5. The only recording that is not available is "Pu Wong".
http://lts.propagande.org/"
All those info taken from the blog Celtic Folk Punk where you`ll find the links to download all their albums.

This tape has 7 tracks well recorded and there are very few info included,good recording but no songtitles. I guess it was a kind of self released demo.
To complete this post I am going to attach here a nice video of a live gig
recorded back in 2003.
Enjoy it.
*f^a*r~a^w*a^y~
click me