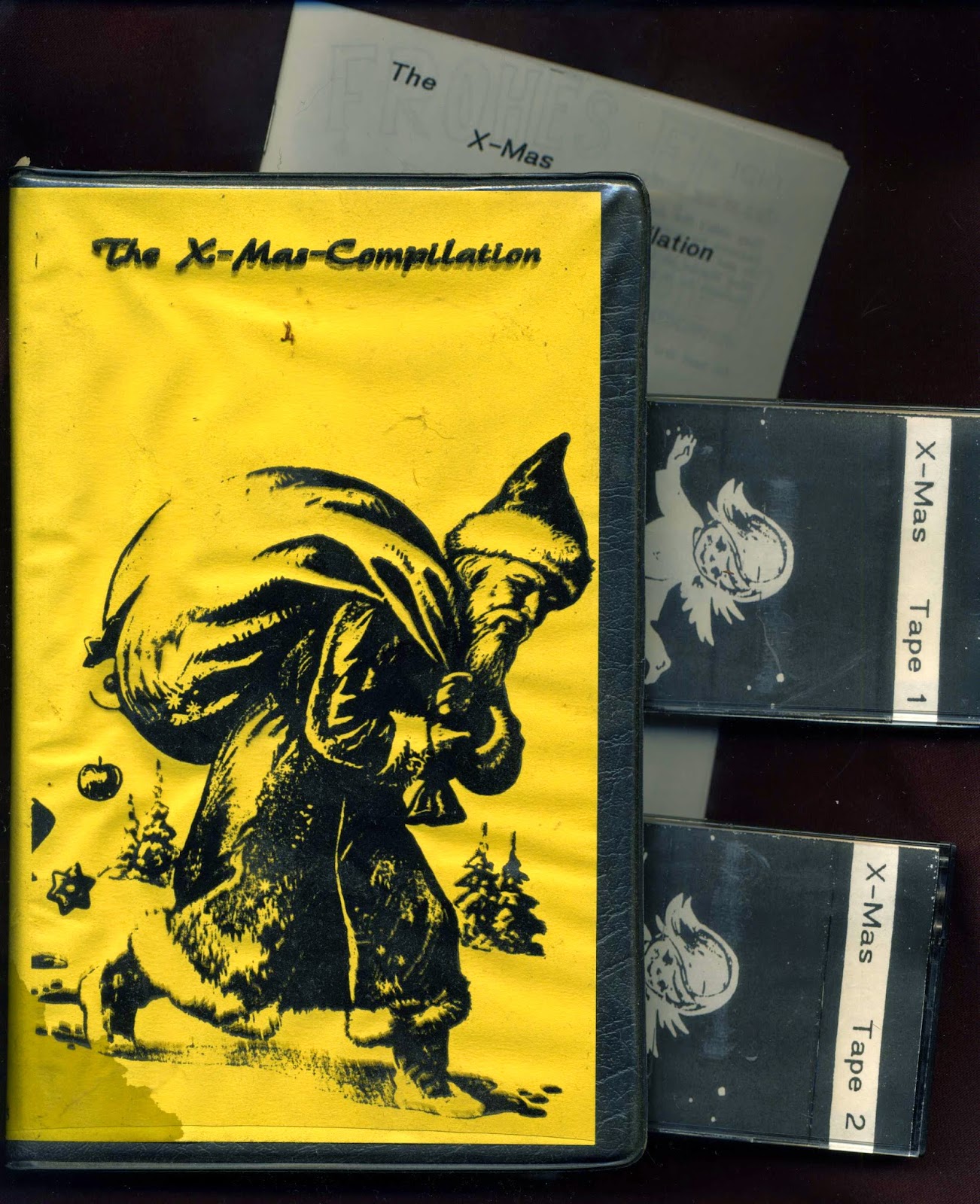 After posting few tapes by the legendary Ebus Music I got back in touch with Carsten Olbrich,the mastermind of this label, I was planning to transfer this double compilation to my pc when he told me that he already had it as digital format,so this is his rip, I asked him to write an introduction to include in this post,  after all, who better than him could write an intro for this great sampler???
Carsten is still very active and you can check his official webpage please go here.
He also plays in a cool radio each 1st Tuesday of every month(8pm to 10pm)please go here to listen to his show, and here the link for his playlists.
So I finish now and leave you all to his nice and detailed introduction.
Big thanx Carsten for passing me this compilation already in digital format and your great remembrances.Enjoy it!
~f~a~r~a~w~a~y~
click me 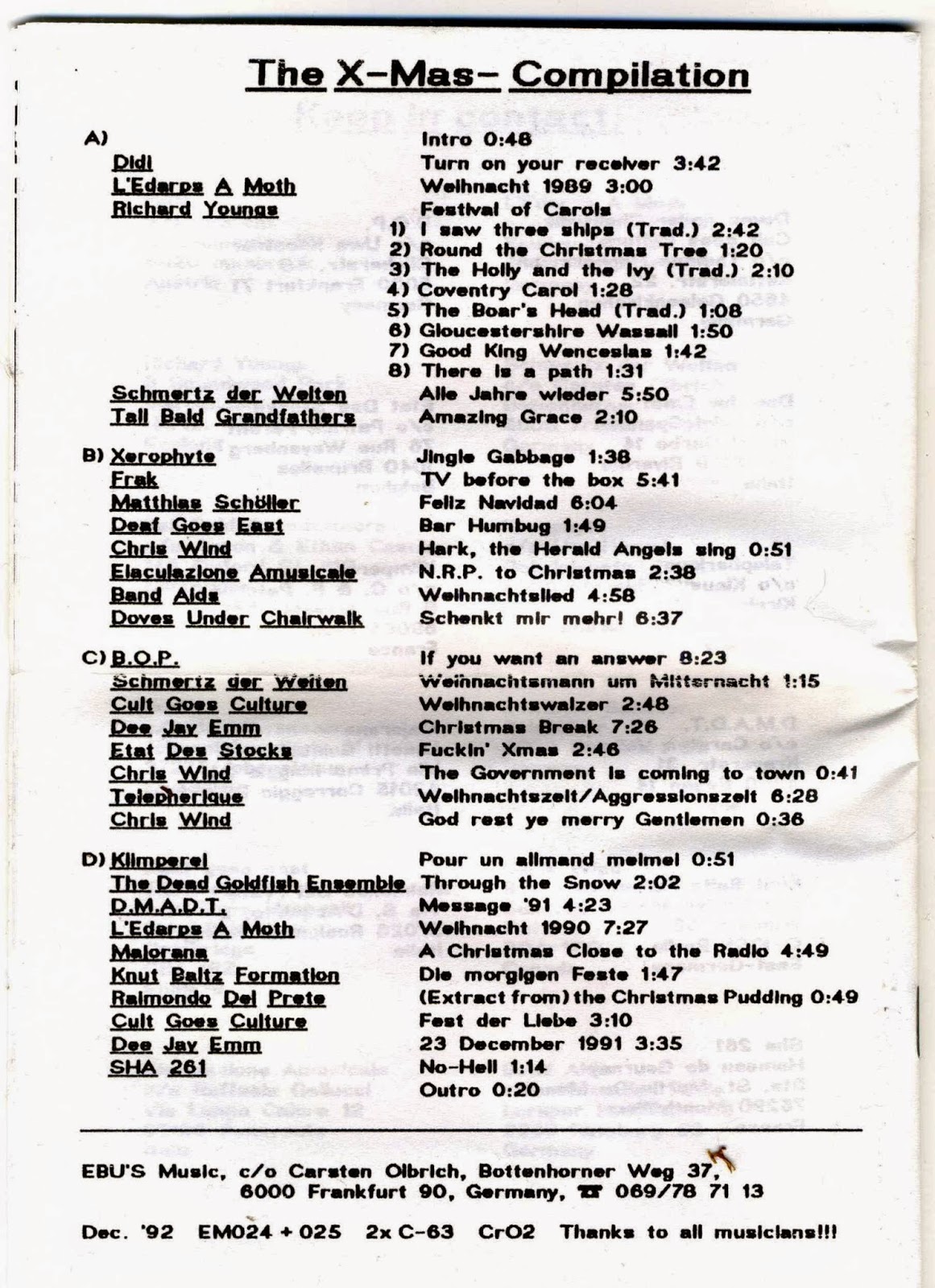 "I cannot remember my first impulse to organize a "X-Mas Compilation". After a few years of EBUS Music this was not the first compilation release, and so I created a very simple flyer and asked also some friends from the tapescene for contributions. The first deadline (end of Novemver 1991) was much too close to X-Mas. Some mastertapes reached me in the mid of December, and I also ran a recall for artwork. At least the X-Mas Compilation was planned to be released one year later in December 1992. Well, it finally came out at Easter 1993, which was a kind of dada-joke to me, even if some people found it strange to listen to Christmas music in April ;-)

Didi was a christian ex-junkie without confession, who later got some fame with his S/M EBM project "Call" (first album "Domina")
L'Edarps A Moth was a good friend from Frankfurt, a very active musician for the tape-underground. He was also the editor of the "Independent-Kontakter" which came out at his "Büro für Akute Planung". His two tracks were recorded at X-Mas 1989 and in 1990.
Richard Youngs was a new artist from England to me. He already had a large discography and sent his 12"-vinyl-LP "Advent" as present together with his master tape. He wrote a detailed description of his traditional Christmas with his dad, which I printed in the booklet.


Schmertz der Welten is my own project. I altered the lyric of the German X-Mas-song "Alle Jahre Wieder" into something ironic about violence against children, and recorded to the original melody my very own version (even if the vocals level is to low...). The other track "Weihnachtsmann um Mitternacht" is still exclusive until today like many other contributions. 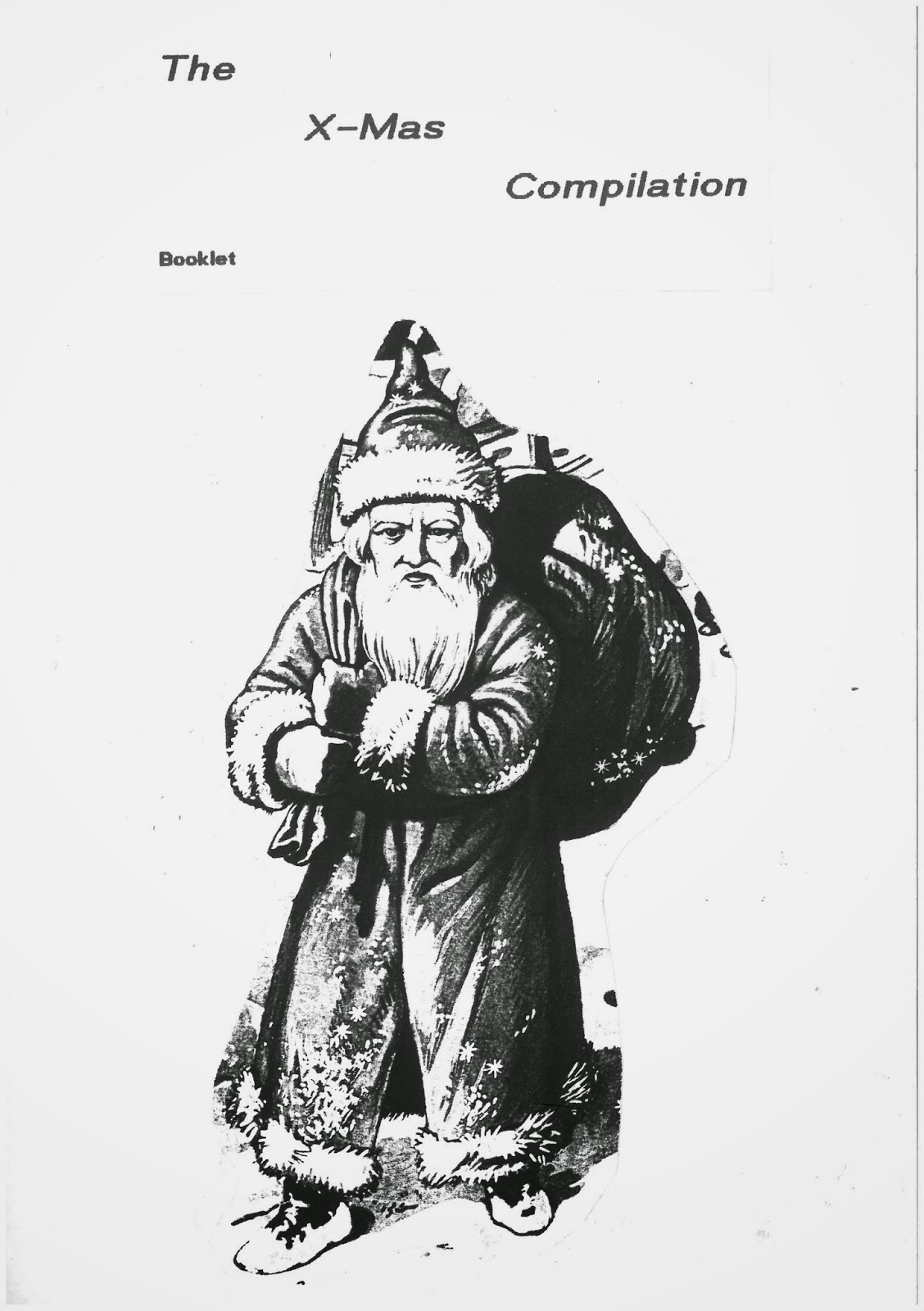 Some more new contacts to me were The Tall Bald Grandfathers, Xerpphyte, Dee Jay Emm (who sent much more artwork than i could use), Majorana, Raimondo Del Prete, SHA 261 and Chris Wind.
Chris Wind is a feminist writer, actress and musician from Canada. I took three short pieces from her "Christmas Album". After she received her free copy, she replied with a thankful postcard, but wrote, that she didn't liked any of the other tracks ;-)
Also Frak from the Swedish label Börft Records contributed an exclusive track.
Matthias Schöller was a musician from the local band "Vague Venture". He also released a whole tape ("The Path") on EBUS Music.


Also  Eiaculazione Amusicale came on board. We had a little misunderstanding with the artwork of his booklet-page. In this digitalized version for this Blog you will find the exchanged page.
My friends Haiko Herden ("The Evasion On Stake") and Alexander Pohle ("Beton Tapes" sent their exclusive X-Mas Medley, which should only be released under a different artist name "Band Aids". 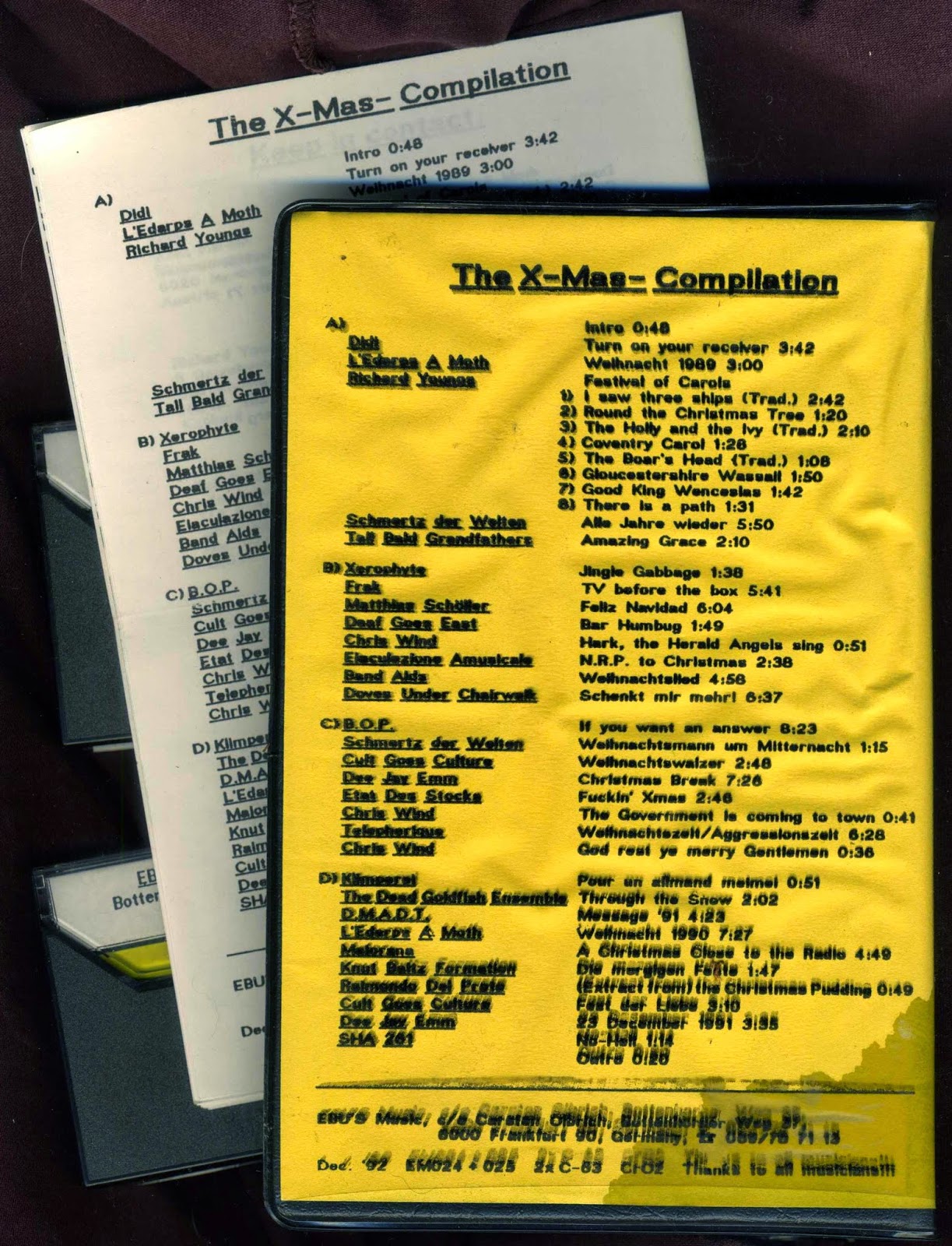 B.O.P. is a shortcut for "Base Of Pyramid". The two persons behind (Tom Pyramid and Ms McGuire) were a couple with whom i and the femalse drummer Anette Bum Betz formaly made music as "Top Of Pyramid".
"Etat Des Stocks" war Patrick Perent from the Belgian label "Red Neon Tapes"


"Telepherique" were Danijela Jochim, Rene Jochim and Klaus Jochim. Klaus was also my contact-person for the label "Drahtfunk Produkt".


"Klimperei" is a well-known project of Christophe Petchanaz. He created a totally unique version of "Stille Nacht" and dedicated the title to me.


"D.M.A.D.T." was a a project of Carsten Vollmer from the label "Cat Killer" with an exclusive track recorded live on 9 Oct 1991. 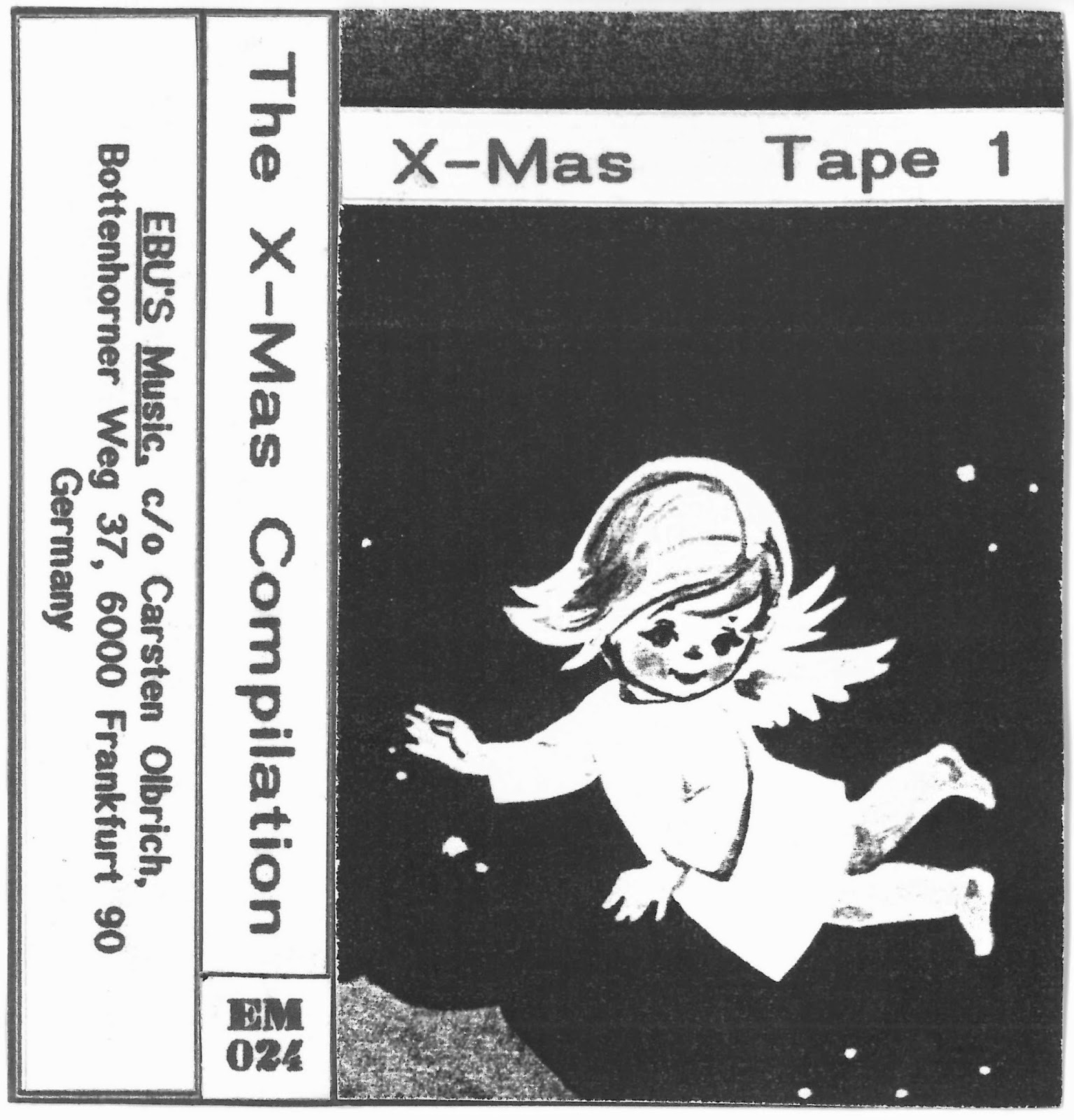 "Knut Baltz Formation" existed even in the GDR. Florian Merkel sent four b/w photos from 1989 and 1990 which I used for the booklet.


Raimondo Del Prete with his child sent a quite long "Christmas Pudding" from which I choose a short extract. At least I was a bit sad for them, that my choice was that short.
SHA 261 wrote in a personal letter to me, that the French word "Noel" comes from the meaning "No Hell".


The X-Mas Compilation was released in a limited edition of 100 copies."