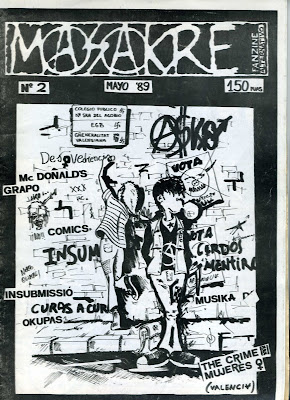 Old political fanzine by a Collective Of Youth In Mislata (Valencia-Spain) covering punk bands and some political subjects.

In this issue American imperialism, Antifascist resistance group "First October", some poetries, history of The Crime Gang Bang from Italy, a report from a prisoner of the Grapo group, some comics, Vegeanza from Peru`, anti-sexism and feminism,Alcoholicos Cronicos from Valencia(Spain),antimilitarist prisoners,Maniatica from Alicante and an article against the heroin.
Very old school it has all the DIY spirit of the punk scene from the 80s. 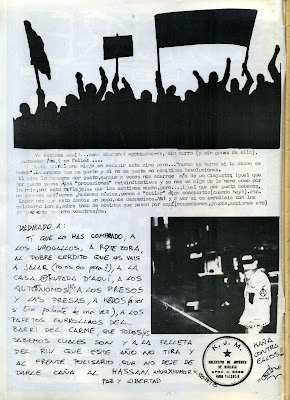 It was all printed with the use of a  Cyclostyle (copier): The Cyclostyle duplicating process is a form of stencil copying. A stencil is cut on wax or glazed paper by using a pen-like object with a small rowel on its tip. A large number of small short lines are cut out in the glazed paper, removing the glaze with the spur-wheel, then ink is applied. It was invented in the later 19th century by David Gestetner, who named it "cyclostyle" after a drawing tool he used. Its name incorporates "stylus", classical Latin word for a pen.
Only in the Spanish language.
Disfrutalo.
~f(a)r_a(w~a)y*
click me
Posted by faraway at 05:10