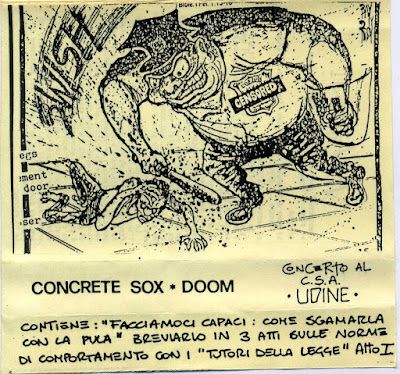 Very good recording of this great gig at the squatted social center in Udine(Northern Italy) on the 30/03/1989.
Concrete Sox was a UK hardcore/crust band formed in the early 1980's - broke up in the 1990's. As of 2009, they are reformed by founding member Vic Croll. I am not sure if they are still active now.
Doom  Formed in 1987 in Birmingham, the United Kingdom, however, they began as The Subverters, with Bri Doom (guitar), John Pickering (bass/vocals) and Jason "Hog" Hodges (drums). About the time Hog was replaced by new drummer, Mick Harris (Napalm Death), the band changed its name to Doom. (read more...)

This tape was re-released as CD-R in 2010 by those labels:
Lazypunx Autoproduzioni, Fra Il Di' E Il Fa' Al'E' Di Mieç Il Mâr Autoproduzioni.
The music in this folder is my rip of the tape, I have added the graphics of the CD-R taken from Discogs.
I guess this will make happy all the crust-punks around the world.
Enjoy it.
~f(a)r~a*w^a~y{
click me