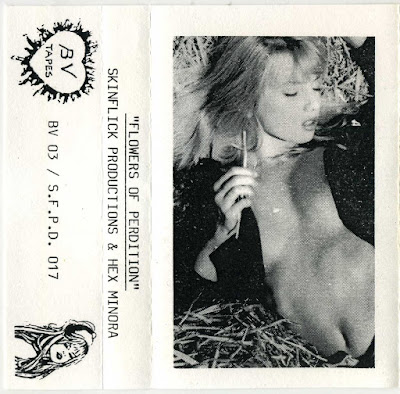 Skinflick Productions formed in 1991 in North Wales, Skinflick still continues to this day as a single one man industrial unit.
Influenced by industrial, punk and metal they started experimenting and fusing the styles together. The band set out gigging extensively around the UK and releasing numerous tape releases. In 1992 the band temporarily changed there name to Skinflick Productions, releasing two 7" records 'Pretty Dead Girl' and 'Pig Sick' plus further tape and cd releases.A discogs page with lots of info about them is here, I posted a video by the same project using the name Skinflick Corporation,you`ll find it here ,this project is still active and  this is their official webpage.

Hex Minora is a female noise artist who also ran BV Tapes,She delivers some great dark occult psycho/sexual elektronikx.I posted a couple of good tapes by this very good label.
This tape was already on Vita Ignes Corpus LIgnum yet this is my rip and I have included in this folder a very nice art-work received by Hex Minora,art-work not part of this tape.
Enjoy it.
~f*a~r*a*w*a~y*
click me
Posted by faraway at 16:04